TRAILS AND TRIALS OF A TEXAS RANGER. 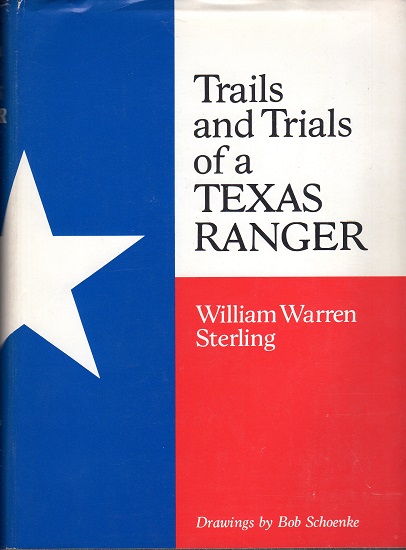 Norman: University of Oklahoma Press, 1968  xvi,536pp. Index.  Numerous photographs.  Line drawings Bob Scboenke.  Bibliography.  Brown cloth with title in gilt on the spine. O. U. Press reprint edition with added index. Book is fine. The price clipped dust jacket shows minor edgewear, overall very good. Adams, Six-Guns 2141:  “Scarce.  Has chapters on the Bandit War and material on Sam Bass, Frank Jackson, Gregorio Cortez, and other Texas Badmen.  The chapter on Bass is largely correct….”  William Warren Sterling was born near Belton in 1892 and spent his early years on his family’s ranch before they moved to Beaumont in 1901.  During 1915-16, when political unrest in Mexico spilled over the Rio Grande border, he was a posse man and scout for the Third United States Cavalry in Hidalgo and Cameron Counties.  After WW II, Sterling was a deputy sheriff in Mirando City during the oil boom in Webb County.  In 1927 Governor Moody appointed him captain, Company D. Texas Rangers and he went immediately to the boomtown of Borger.  In 1928 his ranger headquarters was moved to Falfurrias.  In 1929 Sterling was in Pettus when an oil boom started there and he helped stop the lawlessness.  In January 1931 he was appointed Adjutant General, commander of the Texas Rangers and the Texas National Guard by Governor Ross.  An important, first hand account by a Texas Ranger who served in some of the most remote camps along the Rio Grande, it not gives his experiences but gives his observations on other rangers, bad men, and crime issues of the time