THE LOG OF A COWBOY: A NARRATIVE OF THE OLD TRAIL DAYS. 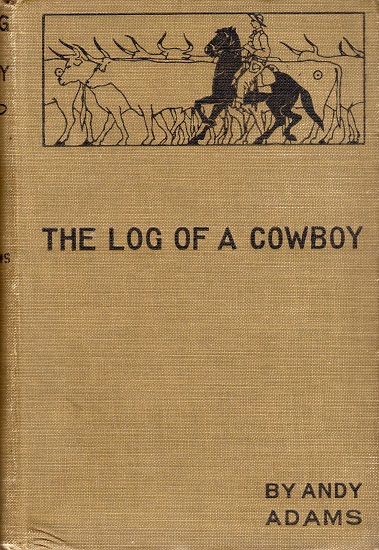 New York, Boston & Cambridge: Houghton Mifflin Company & The Riverside Press, 1903. 387pp. Frontispiece & five plates by E. Boyd Smith. Map. Original olive-green pictorial cloth, title in black ink on the cover and spine. First edition, later issue. Externally, light wear to the extremities of the spine and corners. Internally, there is a previous owner’s name on the front fly. Overall, a very good copy (no dust jacket issued).  Dobie, Life & Literature…. p. 94: “If all other books on trail driving were destroyed, a reader could still get a just and authentic conception of trail men, trail work, range cattle, cow horses and the cow country in general from The Log of a Cowboy.” Western Literature Association, A Literary History of the American West…. p. 525: “Considered by many to be the best of the cowboy genre.” Dykes, Western High Spots p. 20: “None better on trail driving.” Lee, Classics of Texas Fiction p. 2: “The Log of a Cowboy is one of the earliest classics of Texas fiction….As a story of an actual cattle drive, the novel is superb. When it came out in 1903 there were plenty of trail drivers still alive who could attest to the accuracy of Adams’ story of the drive north.” The Log of a Cowboy is an account of a five month drive from Brownsville, Texas, to Montana during 1882. While fictional, the author did incorporate his own experiences as well as those of other cowboys he had met on the trail.  The book originated  when the author became incensed at the exaggerated, unrealistic accounts about the cowboy that were being written. Thus, Adams’ career as a writer was launched and the book became a classic. It remains so today.