FOURTEEN HUNDRED AND NINTY-ONE DAYS IN THE CONFEDERATE ARMY 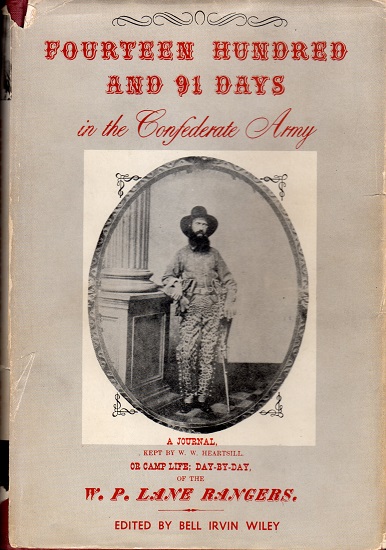 Wilmington, N.C.: Broadfoot Publishing, 1988. xliii,336pp. Introduction. Notes. Photographs. Facsimiles. Original maroon cloth with title in gilt on the spine. Maps(3)—previously unpublished. The frontispiece is a reproduction photograph of Captain Sam J. Richardson in leopard skin pants. Third edition after the exceedingly rare 1867 first. Externally, it is a very good copy. Internally, there is a large ink stamp and ownership signature of previous owner, except as noted, it is good+. The dust is chipped, most noticeably at the spine, and shows heavy wear, overall, fair. Jenkins, BTB 89: “W. W. Heartsill’s Fourteen Hundred and 91 Days in the Confederate Army is the rarest and most coveted book on the American Civil War…The journal itself is historically important. This four-year record is one of the most vivid and intimate accounts of Civil War battle-life that has survived.” Coulter, Travels in the Confederate States 224: “This unusual diary gives a minute account of the author, of his compatriots in the Confederate Army, of many details in the experiences of a soldier, and of the country through which he marched.” Nevins, Civil War Books I 102: “This work recounts not only the experiences of a soldier in the Trans-Mississippi, but also his travels through the North as a war prisoner.” Howes, U.S.IANA 380: “…one of the rarest journals by a Confederate combatant.” Heartsill was twenty-one when the war began. He joined Walter P. Lane’s Texas Rangers and served from April 19, 1861 to May 20, 1865. This is arguably the most sought after Civil War regimental history. What is frequently overlooked is the fact that the unit spent the first year of the war fighting Indians and protecting the western frontier of Texas. Raines, Bibliography. of Texas p. 111. Harwell, In Tall Cotton 86. Dornbusch, Military Bibliography 1046.