THE XIT RANCH OF TEXAS AND THE EARLY DAYS OF THE LLANO ESTACADO. 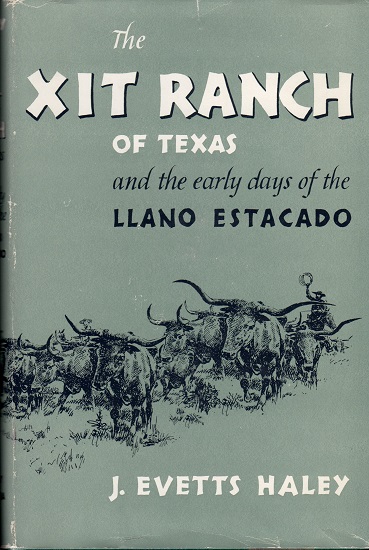 Norman: University of Oklahoma Press, 1953. xiv,258pp. Index. Bibliography. Notes. Fold-out map of the XIT ranchlands. Map of the trails used by the XIT. Numerous photographs. Green cloth. First of this edition (the expurgated O.U. Press edition). SIGNED on the half-title. Bright, fine copy. The dust jacket shows light chipping to the spine ends and edgewear, else very good. Reese, Six Score 54: “A foundation work on ranching in the Panhandle, and an important ranch history.”  Chandler Robinson, Haley’s bibliographer, said it best: “This epic account of the largest and most famous ranching operation of the early West is a landmark in the literature of the cattle country.  Monumental in scope, infinitely detailed, the book presents the history of the Llano Estacado and traces the development and operation of a 3,000,000 acre ranch.  It is one volume that, more than any other, portrays the early-day cattle business of the West.” The first edition of this book was withdrawn from the market when a lawsuit was filed; it seems Mr. Haley referred to someone as an “rustler” (which he probably was) and family members took exception. As a result, the first edition is a rarity. This edition removed the offending material.