THE SAGA OF BILLY THE KID. 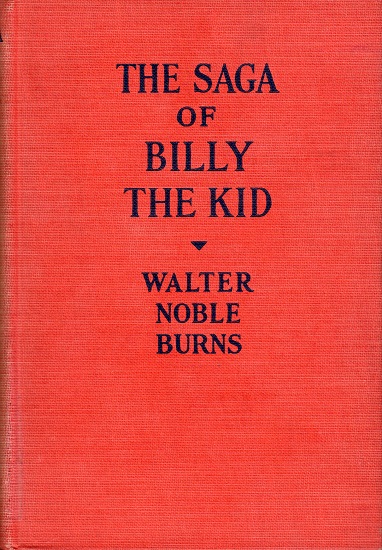 New York: Grosset & Dunlap, 1925 & 1926. 322pp. End paper illustrations by Edward Borgin. Red cloth with title in black ink on the cover and spine. Early reprint edition. With the book plate of Bryan Woolley, Dallas historian and author. Spine faded, else very good. Dykes, Billy the Kid…. 107: “Scarce.” Adams, Burs Under the Saddle 64: “This book probably did more than any other to give the legends of the Kid, a new and lasting impetus. I believe Mr. Burns made an honest effort to follow the Kid’s trail and interview the old-timers of his country, but he had difficulty separating fact from fiction and so decided to include both.” Dobie & Dykes, 44 & 44 31: “This has proved to be the most popular of all narratives of Western outlaws.” Dobie, Life & Literature… p. 140: “It contains a great deal of fictional conversation and it has no doubt contributed to the Robin-Hoodizing of the lethal character baptized as William H. Bonney, ….and now lives with undiminished vigor as Billy the Kid.” Formed the basis for the 1930 movie starring Johnny Mack Brown, Wallace Berry and Kay Johnson.