THE LOST CAUSE: THE CONFEDERATE EXODUS TO MEXICO. 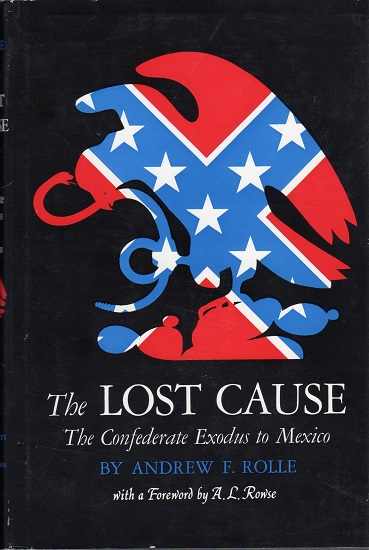 Norman: University of Oklahoma Press, 1965. xv,248pp. Index. Bibliography. Notes. Illustrations. Map. Hard cover. First edition, review copy with the review slip laid-in. Except for two stains to the foredge of the page, the book is fine. The dust jacket shows minor edgewear, overall very good+. For many Southerners the Confederate struggle did not end with the surrender of Robert E. Lee. In 1865, almost 10,000 unreconciled Confederates refused to accept surrender and fled to Mexico where they proposed to establish a colony of kindred spirits. Among the emigrants were a number of prominent Southern leaders: General Jo Shelby, Sterling Price, General John Magruder, Commodore Matthew Maury, and Thomas C. Reynolds (former lieutenant governor of Missouri) to name a few. This is an in-depth look at the exodus, exile, and repatriation of these former Confederates. An important, scholarly examination of this understudied event in Civil War history.