THE EVOLUTION OF THE COLT: FIREARMS FROM THE ROBERT Q. SUTHERLAND COLLECTION. 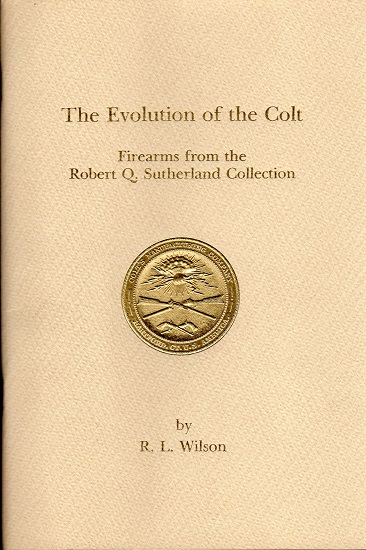 N.p.: Privately published by Robert Q. Sutherland, 1967. ix,54pp. Photographs. Bibliography. 9” x6” in stiff tan wrappers with the “Colt’s Manufacturing Company” logo embossed in gold on the front cover. First edition. SIGNED by the author. Fine copy. In preparation of the book, the author made no attempt was to cover the Colt story in detail or to comment on all firearms made by them. Its focus is to combine an introduction to rare Colt firearms with a brief account of the most significant evolutionary steps in the Colt story. The selection and sequence in this book is designed to complement the publication by the Colt factory on the evolution of the Colt. R. L. Wilson was a noted firearms author, researcher, scholar, and historian who has been described as “America’s leading authority on antique firearms.” He authored or coauthored over 50 books on the subject and has written in excess of 300 magazine articles. He meet Robert Q. Sutherland in the 1960s and became a consultant and buying agent for him. The result was one of the most outstanding collections of Colt firearms ever assembled, particularly in prototypes and one-of-a-kind guns. Signed copies are scarce.