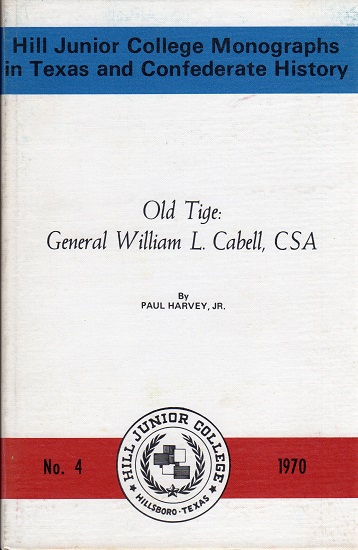 Hillsboro: Hill Junior College, 1970. ix,89pp. Index. Bibliography. Notes. Photographs. Hard cover. First edition. Light soiling to the covers and the book plate of a previous owner, else near fine. Cabell was a fifth generation Virginian from a prominent English family. He attended West Point and was graduated with the Class of 1850. In the decade before the Civil War he was assigned to a number of posts including Fort Gibson in Indian Territory. Cabell resigned his commission from the U.S. Army to serve as quartermaster under Confederate generals Beauregard and Johnston. Subsequently, he was assigned to General Van Dorn and was eventually given command of a combined Texas/Arkansas unit. He would lead this brigade in a number of engagements. In February 1863, Cabell was placed in command of Northwest Arkansas and lead this unit in over 20 engagements in the Trans-Mississippi Theater. He was captured in Kansas during Sterling Price’s Missouri Expedition and was held as a prisoner of war until July 24, 1865. There is a great deal of information on Cabell’s post-Civil War business and political career including his four terms as mayor of Dallas. This well done biography of Cabell is a valuable addition to the history of the Civil War and the history of Dallas.