NATHAN BEDFORD FORREST: FIRST WITH THE MOST. 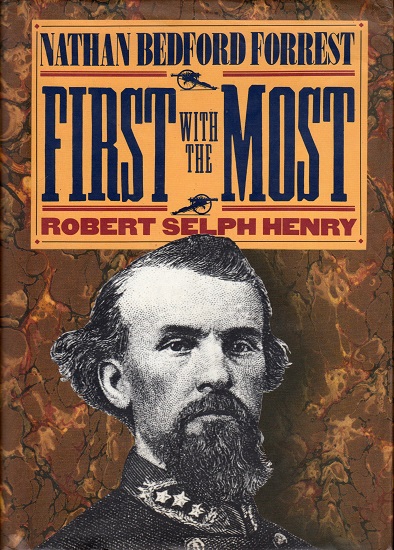 New York: The Mallard Press, 1991. 558pp. Index. Notes. Bibliography. Maps (10). Hard cover. Second edition after the scarce 1944 first. Externally, a fine copy. Internally, the pages show faint toning to the perimeter due to paper quality, else fine. The dust jacket exhibits slight edgewear, else fine. The New York Times: “…not only a sound and scholarly work but also stirring.” Despite having no formal military training Forrest rose from the rank of private to lieutenant general, fighting in numerous engagements including Shiloh, Chickamauga, Brice’s Crossroads and Second Franklin. He relentlessly harassed Union forces during the Vicksburg Campaign in 1862 to 1863, and successfully conducted operations against Union supply and communication lines throughout the war. In addition to chronicling his military activities, Henry devotes sections to his post-Civil War life and activities. The author has relied on official records extensively and gathered additional information from a number primary sources. The result is a biography of Forrest that, while favorable, is also balanced.