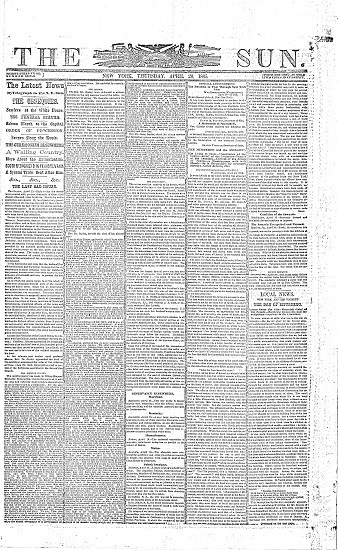 New York, April 20, 1865. 4pp. Toned, creased from being folded, very minor chipping to the edges, except as noted, very good. A detailed account of Lincoln’s funeral describing the massive crowds along the route from the White House to the Rotunda and the services in executive mansion including the text of the opening prayer and sermon. It observes that “Mrs. Lincoln was not at the funeral. It is said she has not seen her husband’s body since the morning of his death.” Gives a description of Lincoln’s appearance describing his face as having “a sweet and most touching expression.” It gives the route of corpse from Washington to Springfield as well as an account of the arrest of Mary Murrat [sic] and Lewis Paine, who attempted the assassination of then Secretary of State William Seward. Interestingly, the price of the paper was one cent in gold and two cents in currency.