AN EULOGY, ON THE LIFE AND CHARACTER OF DR. ASHBEL SMITH. DELIVERED AT THE TEXAS STATE UNIVERSITY COMMENCEMENT, BEFORE THE REGENTS, FACULTY AND STUDENTS, BY INVITATION OF THE BOARD OF REGENTS, IN THE CITY OF AUSTIN, TEXAS, JUNE 15, 1886. 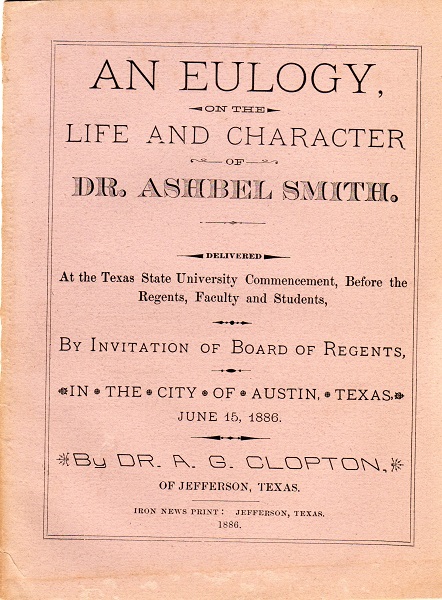 Jefferson: Iron News Print, 1886. 16pp. Original printed wrappers. Advertisement for the “Texas State University at Austin” touting free tuition. First edition. Externally, slight insect damage to the bottom of the front wrapper and minor edgewear. Internally, the pages are uniformly toned with a small hole to the first page (obscuring one word) and a few scattered short tears at the edges. Considering the extremely fragile nature of the binding, this is, at least, a very good copy. This contemporary biographical sketch is of great importance as it is about a man described by C. W. Raines as: “…one of the really great men of the Republic. Dr. Smith was a diplomat and scientist, and his French was approved even in Parisian circles. He rendered invaluable service for Texas in England and France…” John Jenkins: “No one, with the exception of Sam Houston and Anson Jones, was more intimately involved in the process of acquiring international recognition of the Republic of Texas and bringing about annexation than Dr. Ashbel Smith.” Dr. Smith, a Yale graduate, was also a leader in the advancement of education in Texas. He was the founder of the University of Texas and president of the board of regents.  Arriving in Texas in 1837, he became a close friend of Sam Houston and was appointed by him to be Surgeon General of the Army of the Republic. Later, he would serve under General Zachary Scott in the Mexican War. He was also a brigadier general in the Confederate Army and commanded the defenses of Galveston Island. Not cited by any of the usual bibliographical references, such as Howes, Raines, Graff, and Eberstadt, it is quite scarce and seldom offered.