ALL AFIRE TO FIGHT: THE UNTOLD TALE OF THE CIVIL WAR’S NINTH TEXAS CAVALRY. 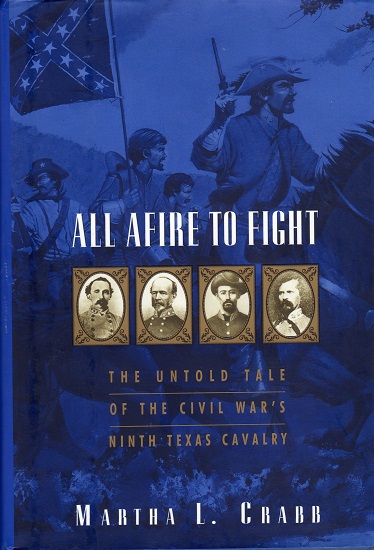 New York: Avon Books, Inc., 2000. xxxv,423pp. Index. Illustrations. Maps (13). Notes. Bibliography. Hard cover. First edition. One tiny corner bump and crease to the front free fly, else fine. Slight edgewear to the dust jacket, else fine. The 9th Cavalry Regiment was organized with 1,050 men during the summer of 1861. In October, they forded the Red River where they participated in a number of fights with “Yankee Indians” including the battles of Round Mound and Bird Creek. In January 1862, the unit moved east of the Mississippi, there they participated in Sul Ross’s raid into Missouri, Elkhorn Tavern, Vicksburg and a host of other skirmishes. In writing the book the author, to the degree possible, relied on letters, diaries, journals and memoirs to tell the story of the men of the 9th Texas in their own words. Additionally, she drew from county histories, unpublished U.S. Archives and official military records. The result is a well written, highly readable account.