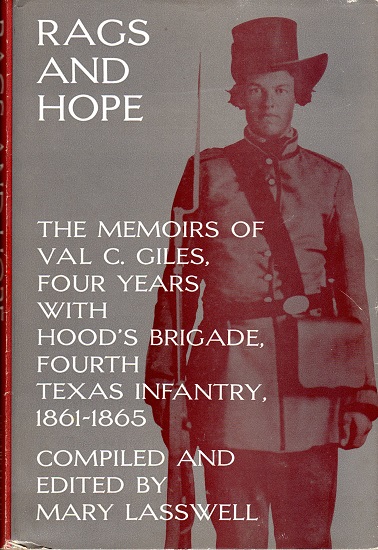 New York: Coward-McCann, Inc., 1990. 280pp. Compiled & edited by Mary Lasswell. Gray cloth, title in gilt on spine. First edition. Has a crimp to the cloth at the top of the spine and some faint brownin. Exhibits small spots of foxing to the top page edge. Overall, very good-.  The dust jacket has what appears to be an editor's red crayon markings and a single notation on the dust jacket flap and spine, else good+. At nineteen Giles enlisted in the 4th Texas Infantry becoming part of Hood’s Brigade and Lee’s Army of Northern Virginia. He would fight in the battles of Yorktown, Williamsburg, Second Bull Run, Fredericksburg, Second Manassas, Gettysburg, Chickamauga and others. His accounts are not romanticized but are honest and straightforward. Giles recounts the retreat from Gettysburg and the determination of him and other soldiers to continue the fight as they “plodded on in rags and hope.” Gives his impressions of Longstreet, Hood, Stuart, Stonewall Jackson, Jeff Davis and Robert E. Lee. A very readable, first person account.