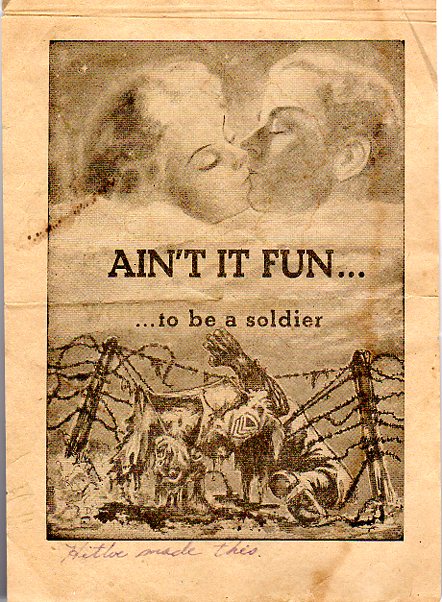 Single sheet approximately 8 ½” x 6” printed on both sides. One side is a drawing of a man dreamily kissing his girl at the top and at the bottom that is ghoulishly drawn dead G.I. entangled in razor wire. The other side delivers the propaganda message which reads in part: “NOW is the time to say your prayers…because you’re headed to Aachen…THE FUN IS OVER NOW….and Jerry resents you knocking at his door….that means….at least 50% casualties!” The leaflet shows a few small tears and stains, creases from being folded and someone has written in purple ink “Hitler wrote this.” Overall, it is still in surprisingly good condition. This type of propaganda was dropped on opposing troops by both sides in an attempt to unsettle the enemy. For the most part, they were thrown away, used as kindling, or for toilet paper. Consequently, they are very scarce today. Aachen was the first large city in Germany taken by the Allies (October 21st, 1944).