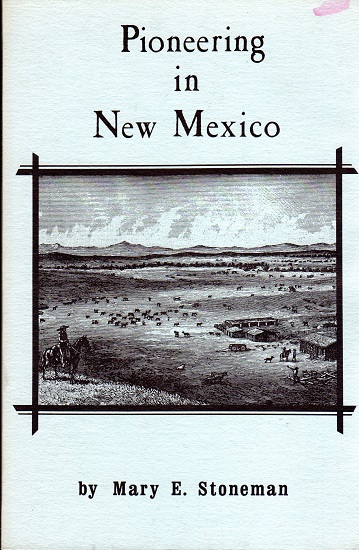 Santa Fe: Sleeping Fox Enterprises, 1974. 93pp. Pale blue pictorial wrappers. First edition. Except for a small faint pink smudge, it is a near fine copy. The title is a bit misleading as about half the book deals with the author’s  childhood and early adulthood in Texas. She was born in 1885 in Mason County, Texas, near the Blue Stretch schoolhouse, site of the famous Goodall and Faulkner gunfight. The author opens with a brief account of the shootout in which all the participants were either killed or wounded. After a brief attempt at ranching in New Mexico, the family returned to settle in San Saba County, Texas. She tells of her childhood in San Saba as well as her recollections of the San Saba Mob, the killing of Will James and some of the “Mob’s” other activities. It was her father’s concerns about the “Mob” that caused him to move the family to Jayton in Hunt County. These are some of the happiest times of her childhood and she writes extensively about growing up there. At sixteen she would marry and eventually settled in Jayton. As a young woman in her twenties with three children, she describes the challenges of raising young children, working, cooking, cleaning, etc. These challenges were enhanced by her husband’s excessive imbibing. There is much on the development of Jayton with the arrival of the railroad. She, her husband, and, by now,  eight children would next move to New Mexico to homestead 640 acres. The author recounts their trip by wagon with the men driving a herd of 75 cows and 42 horses. She describes open range ranching, disputes over water, sheep raising, harsh winters, trips to Roswell for supplies, and the general challenges of homesteading. At forty, Stoneman begins an entirely new career in education. She would teach in Roswell, White Oaks, San Simon, and other small New Mexican towns. There are descriptions of the certification process, one room schoolhouses, courses, and challenges with both parents and students. This a frank, frequently poignant account of life as woman in rural Texas and New Mexico from the turn-of-the-century into 1930s. Doubtless done in a small edition, it is very scarce.