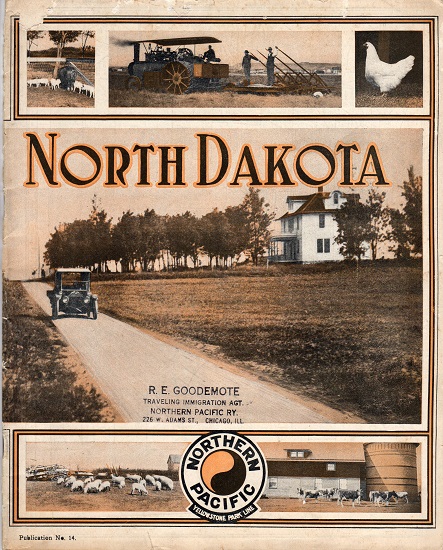 N.p. [St. Paul]: Published by the Northern Pacific Railway, n.d. [1916?]. 64pp. Approx. 10 ¼” x 8 ¼”. Full color map on the inside front cover showing the counties of Montana and lines, both existing and proposed, of the Northern Pacific. A black & white double page map shows the areas served by the Northern Pacific in the Northwest. It gives not only rail lines and highways but lists what may be taken in a carload of “immigrant movables” as well as regulations for shipping livestock into North Dakota. Numerous photographs and advertisements. Pictorial wrappers, stapled. Ink stamped: “R. E. Goodemote, Traveling Immigration Agt. for the Northern Pacific Ry. 226 W. Adams St., Chicago, Ill.” First edition. Light general wear with insect damage (?) to a small area along the top edge effecting a small corner of the map inside the front cover. Except as noted, a very good copy. A promotional publication issued by the Northern Pacific its focus is on the farming and livestock industries in North Dakota. There is information on climate, rainfall, high crop yields, the kinds of crops that can be raised and the quality of livestock. A large portion of the magazine is devoted to a description of the counties served by the Northern Pacific. It gives a summary of each county giving its history, land area, crops raised, and principal industries. It concludes with a selection of letters from immigrants relating their experiences and the opportunities offered in North Dakota.