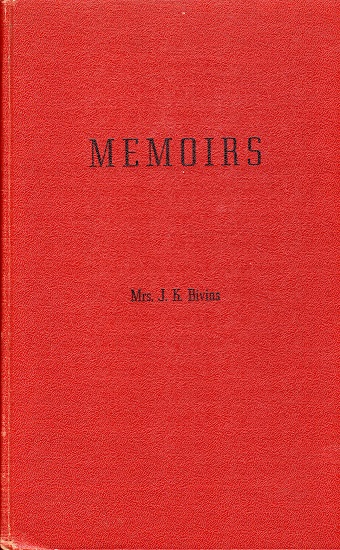 N.p.:  Privately printed, n.d.[ca.1946].  138pp.  Photographs.  Original red cloth with the title on the front cover.  First edition.  INSCRIBED by the author to Lee Shelton and family.  Externally, minor wear to the spine ends, else near fine.  Internally, there is some foxing mostly to the prelims and “crinkling” to a couple of pages.  Overall, it is a bright, very good copy. Adams, Six-Guns 216: “Scarce.  A privately printed book with a chapter on Cullen Baker, an early Texas outlaw.”  A good portion of the book is devoted to her husband, who as a sixteen-year-old boy, joined Company B of the Seventh Texas Infantry.  Bivins was captured at Fort Donaldson, Tennessee (his first battle) and spent seven months as a prisoner of war at Fort Douglas, Chicago.  After his exchange at Vicksburg, he rose to the rank of Captain and participated in the battles of Chickamauga, Missionary Ridge, Ringold, New Hope Church, Kenesaw Mountain, Atlanta, and Jonesboro.  Bivins was with Joseph E. Johnston at Greensboro, North Carolina when the war ended.  After the Civil War, he achieved post-war success in the sawmill business in Cass County.  There is information on East Texas pioneers, the Ku Klux Klan, genealogy of Cobb and Bivins families, various stories and reminiscences as well as some interesting observations on General Hood.  Not in Dornbusch (see III-296 for a later work).