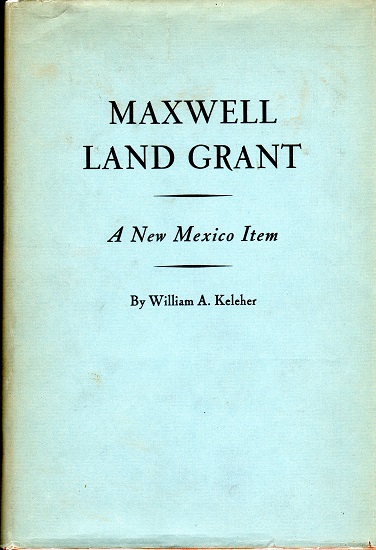 Santa Fe:  The Rydal Press, 1942.  xiii,168pp.  Photographs.  Index.  Bibliography.  Notes.  Original tan pictorial cloth.  First edition.  INSCRIBED.  A clean, very good copy.  The dust jacket shows tanning to the spine and perimeter of the panels but is largely chip-free, except as noted very good.  Adams, Six-Guns 1215:  “It deals mostly with Lucien B. Maxwell and the huge land grant that became known by his name, but it does contain some material on Clay Allison, the vigilantes of New Mexico and Billy the Kid.”  Dobie, Life and Lit of the Southwest p. 109:  “This history brings in the ranching only incidentally; it focuses on the land business, including grabs by Catron, Dorsey, and other affluent politicians.”  The Maxwell grant contained over 1.7 million acres and covered parts of northern New Mexico and southern Colorado.  Inscribed copies of the first edition in the dust jacket are scarce.