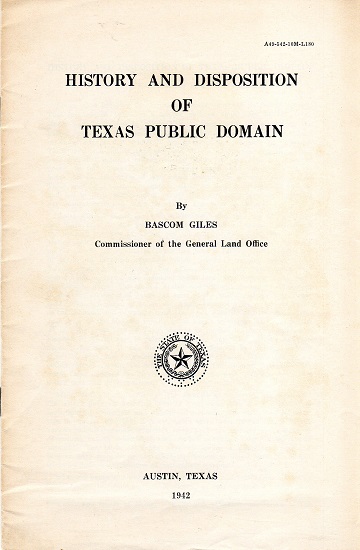 Austin: General Land Office, 1942. 14pp. Original white printed wrappers. First edition. Showing a “1942” date on the front cover with 14 pages versus a “1945” date and 18 pages. Faint foxing to the wrappers, else fine. A concise overview of the disposition of Texas public lands beginning with grants to induce immigrants by the governments of Spain and Mexico and continuing to 1942. Includes a chart which summarizes the disposition of public lands under the Republic and State governments. The author served as Texas Land Commissioner from 1931 to 1955. After WW II, Giles proposed a constitutional amendment allowing Texas veterans to buy land at low interest rates and with a minimal amount down. On March 5th 1955, the commissioner was charged with conspiracy to commit theft and was sentenced to six years in prison. Giles moved to Florida after his release where he was killed in a car wreck.