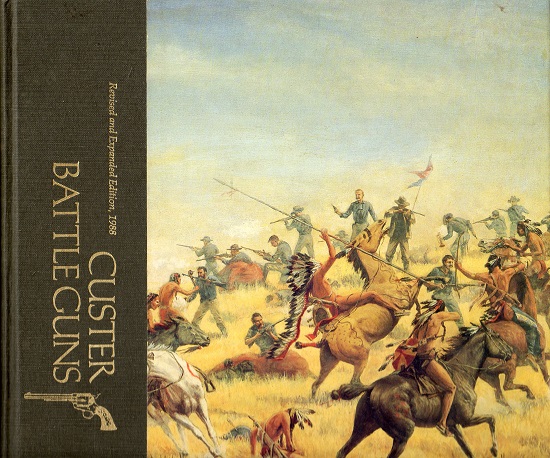 Canaan: Phoenix Publishing, 1988. ix,106pp. Index. Illustrations. Photographs. Facsimiles. Appendices. Notes. Foreword by James S. Hutchins. Illustrated endsheets. Pictorial paper over boards reproducing Theodore Baldwin Pitman’s “Custer’s Last Stand” with brown cloth spine. Revised and expanded second edition, limited to 1500 copies. Slight corner wear and tiny faint spotting to a portion of the spine, overall very good. From a collector’s standpoint, the serial number ranges of possible 7th Cavalry weapons is extremely important since no conclusive records of serial numbers was kept by the 7th. Information subsequently provided by Historian Wiley Sword is a valuable addition. Aside from the research on serial numbers, there is information on the types of weapons carried by the 7th including the personal weapons of General Custer and his officers, issues with ammunition, critiques of the various weapons and their deficiencies, Indian weapons, etc. One of most interesting sections is a letter from General Edward S. Godfrey. In it he describes the battlefield as seen by him and his associates immediately after the battle. In it, Godfrey provides details of the weapons carried and manner of dress of Custer and others, locations and conditions of the bodies, and other details. An excellent, comprehensive study, this is the preferred edition.