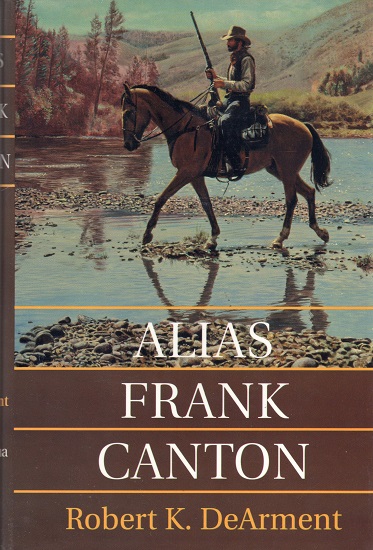 Norman: University of Oklahoma Press, 1996. ix,402pp. Index. Notes. Bibliography. Frontis. portrait. Photographs. Maps (5). Orange cloth title in yellow ink on spine. First edition. Fine copy in an equally nice dust jacket. Sierra Adare, History Review: “DeArment has done his usual bang-up research job, and the intriguing Horner/Canton true Western tale makes for a fascinating read.” Fred Egloff: “DeArment has written a fast-paced objective biography that will be a significant addition to western history collections.” The author has written the first comprehensive account of the controversial lawman Frank Canton.  Born Joe Horner, he was convicted and imprisoned for robbing a bank in Comanche, Texas.  He escaped, changed his name to Frank Canton, and joined the side of law and order. Canton was hired by the Wyoming Stock Growers Association and was a major figure in the Johnson County War in 1892. He moved to Oklahoma Territory in 1894 and served as a deputy U. S. Marshall under the famous Judge Isaac Parker. In this capacity, Canton pursued desperadoes such as the Dalton boys, Bill Doolin, and the Dunn brothers. In 1897, he went to Alaska and worked as a peace officer with a bit of gold prospecting on the side. By the turn of the century, Canton had returned to Oklahoma and, after working in various law enforcement roles, became Oklahoma’s first adjutant general in 1907, a position he would hold until 1916. DeArment carefully chronicles his early lawless days in Texas, his participation in the Johnson County War including the killing of Nick Ray and Nate Champion, relates his numerous encounters with many of Oklahoma Territory’s desperados, his experiences with and observations on other famous lawmen like Heck Thomas, Chris Madden, and Bill Tilghman during that period, his time in Alaska including his experiences prospecting for gold, and his ultimate success as adjutant general of the new state of Oklahoma. DeArment has relied heavily on primary sources as well as Canton’s own writings to produce an excellent biography on this enigmatic western figure.