A WOMAN’S REMINISCENCES OF SIX YEARS IN CAMP WITH THE TEXAS RANGERS. 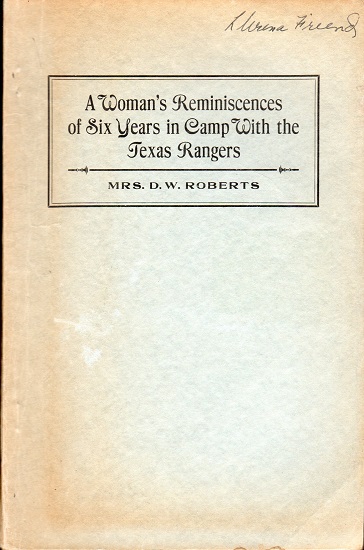 Austin: Press of Von Boeckmann-Jones, n.d. [1928?]. 64pp. The frontispiece is composite portrait of the rangers of Company D. Photographs. Pale blue wrappers with the title in black ink. First edition. The front cover has the ownership signature of Llerena B. Friend--- author, historian, and founding director of the Barker Texas History Center. Exhibits the usual browning to the perimeter of the wrappers, else a very good copy. Jenkins, BTB 178n: “An essential companion work to [D. W. Roberts’] Rangers and Sovereignty.…Known as the ‘Assistant Commander’ of Company D, she was in the field with her husband during most of his time of service. Her memoirs are full of incidents of tent life in West Texas….Mrs. Roberts, said Dobie, ‘was a sensible and charming woman with a seeing eve.’” Tate, Indians of Texas 2472: “A unique account of ranger activities against small band of Indian raiders who occasionally crossed the Rio Grande into southwestern Texas during the late 1870s.” Myers, Following the Drum p.11: “Account of a Texas Ranger’s wife, who spent 1876 – 1882 in camp with her husband in Texas and New Mexico. She tells of experiences with isolated ranch families, often the only neighbors of the camp, and how some Rangers invested their pay in livestock, and thus becoming quite wealthy when their term of service ended.” Adams, Six-Guns 1871: “The author tells about some of her husband’s encounters with outlaws and feudists.” The author recounts, firsthand,  her experience with the violence of the Mason County War, social activities in town and in camp, the periodic relocation of Ranger encampments, observations on individual Rangers, the abundance of good hunting and fishing, trips to Austin to collect the Rangers’ pay, and birth of the gold mining town of Nogal, New Mexico. Considerably more scare than her husband’s book, she provides an in-depth view of the Texas Rangers from a woman’s unique perspective.