A SHORT HISTORY OF THE SIXTH BOMB GROUP. [Cover Title] 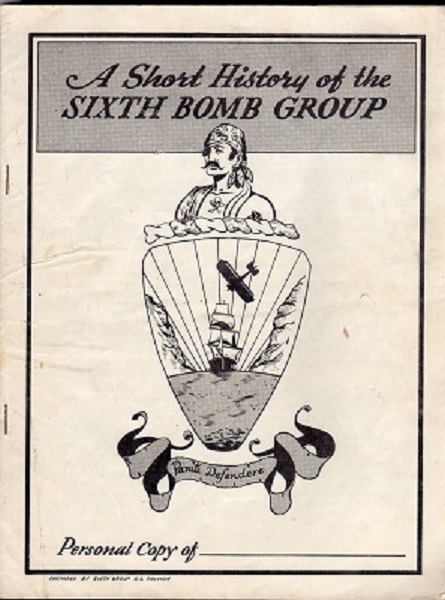 N.p. [Marianas?]: Privately printed by the Sixth Bomb Group, n.d. [1945?]. 8pp. Photographs. Printed pictorial wrappers, stapled. Probable first edition. Light soiling to wrappers, else, very good. The Sixth Bombardment Group was first organized as the Third Observation Group in the Panama Canal Zone on September of 1919. Their operations were mainly concerned with the defense of the Canal, training, participating in maneuvers, flying patrol missions, etc. They were deactivated in the Canal Zone on the summer of 1943. With the entry of the United States into World War II, they were reconstituted as the  Sixth Bombardment Group (Heavy) in April 1944 at Dalhart, Texas. After advanced training, the Six Bomb Group moved to the Tinian Islands in the northern Marianas in November, 1945, and promptly began attacks on the Iwo Jima and the Truk Islands. Later they would fly incendiary raids throughout Japan, assist in helping to mine the Shimonoseki Straits and harbors in Japan and Korea. With the War ending , they dropped food and supplies to Allied prisoners.  On October 18, 1948, the Sixth Bombardment Group was deactivated at Okinawa. As the title states, this is a brief history of the Sixth Bomb Group presented in an informal style. It begins with a listing of some of the commendations received by the unit. This is followed by an overview of the Sixth’s history and gives information on its commanding officers, numbers and types of missions flown, etc. A section titled “Coral Canebrake and C-Rations” is an interesting account of the challenges of setting up their base in Tinian cane patch. Told in a causal style, it describes the challenges and the ingenuity required to establish a “home like community that was pleasant enough, but which all were eager to trade for something Stateside after [mission] No. 35.” It concludes with a “A Combat Crewman’s Diary.” Covering from February 25, 1945, to July 29, 1945, it contains a number of entries describing the incendiary bomb runs made by the group over Japan. The feelings on one low level mission over Tokyo was described: “Boy how we sweated this one out, before, during, and after.” Additionally, it contains material on their activities mining sea coasts and harbors. Scattered throughout are photographs, most likely, taken by members of the Sixth. A rather fragile work distributed to members of the unit, it is rare with WorldCat locating no copies.